When and how to insert high-performers into teams

There is now good research support for the idea that skills distribution follows a power law and not a bell curve. For a good summary see Josh Bersin’s article in Forbes “The Myth Of The Bell Curve: Look For The Hyper-Performers.” 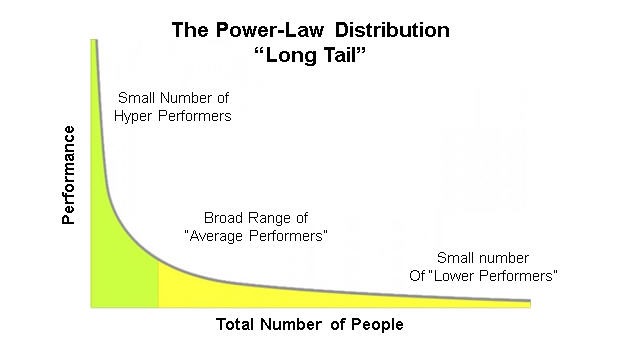 What does this mean? Well, most people are below average in a power law distribution.  You have to rely on a small group of top performers to drive your organization. You need to open space for them to perform to the peak of their powers.

What does this mean for teams? There are two approaches to take. In some cases you will want to insert high performers into teams to pull the whole team up. Not all high performers can do this.

Many years ago I was at a concert in Tokyo with Bo Diddley and Ron Wood of the Rolling Stones. The backup band came on first and played a set. They were, well, a bit worse than average.

Then Ron Wood came on. He reeked of ‘cool’ and he can really play the guitar. He made the backup band look bad, he was just so much better than them.

Finally, well into the evening, we got Bo Diddley. The man could make his guitar talk. But even more importantly, he pulled up the back-up band up to a higher level. Even Ron Wood sounded better, like he was playing with the band and not over them.

This is a very special skill that some high-performers have and is worth seeking out and cultivating. People who can help people perform above their natural level share some critical skills and characteristics.

Note the Connector skills (skills that link two skills clusters, in this case between two or more people) and Complementary skills (skills held by two different people where each reinforces the other, like a bassist and a drummer) are specific to the skill profiles of the people on the team. Just because a person is good a lifting a rock band, they may not have the complementary and connector skills needed for Jazz.

One of our goals at TeamFit is to find ways to identify such people and their skill profiles so that they can be included in teams.

The other way to use high-performers is on the A Team. This is a team where everyone is a high performer. You have to be careful with these teams. A group of individual superstars do not always beat a well-integrated team. Even the A Team needs some people with high EQ and a pattern of connector and complementary skills.

TeamFit is also working on ways to build the A-Team when you need it and then make sure that these high-performing individuals will also form a high performing team.

more related articles for you
all articles

Survey: Are Skills Relevant in 2016
by Steven Forth |

Managers have to worry about many things. Making revenue and profit numbers, customer satisfaction and their Net Promoter Score, employee engagement, trends that could disrupt their industry … it seems endless. Should skills be on …

Skill Building for 2016
by Steven Forth |

Welcome to 2016. We hope you had a great holiday season and are back at work full of hope for the New Year. At TeamFit, we are obsessed with ‘skills.’ We help people understand their own …

2015 Top Six: The Future of Consulting, Project Management and the Software that Supports Them
by Steven Forth |

2015 was a year of change for many people. The impact of the contingent economy on professional services companies became a common theme, as was the need for these companies to become agile and make …

Three Views of a Skill
by Steven Forth |

At TeamFit we spend a lot of time talking to people about their skills, parsing through skill and competency models, and looking at skill maps. One thing that often comes up is concern about overly general …